The Endless are the anthropomorphic embodiments of powerful natural forces they embody. They regard themselves as a family, referring to each other as siblings and they are known to be the children of the cosmic entities Night and Time.

From oldest to youngest they are: Destiny, Death, Dream, Destruction, Desire, Despair, and Delirium, who was previously known as Delight.

All of the Endless has a realm in which they are absolutely sovereign. Within their realm, all members of the Endless have a "gallery" containing symbols, or sigils, of the other Endless. The Endless may contact each other by holding the appropriate sigil and calling for that member of the Endless. Within these galleries, each of The Endless also possesses a sigil, though it is not necessary to hold the sigil when you speak to another Endless; it seems to be customary to hold it, tell your sibling that you hold their sigil, and then ask permission to enter their realm or call them into yours. Destiny is also able to summon his siblings by using his gallery of portraits, whether they want it or not (as seen in The Sandman: Overture).

The Endless are a dysfunctional family, and do not often get along with each other. Destiny is aloof, and rarely interacts or aids the others. Destruction has left them. The three youngest siblings dislike Dream, as they believe he is too arrogant and considers himself better than them. Desire often manipulates the others, teasing them and trying to anger them. Delirium confesses that she finds Dream scary, and often feels like he is silently mocking her. Death is the only one who seems to be on relatively good terms with every other member of the family.

In Brief Lives, Dream's relationship with Delirium significantly improves after he helps her track down Destruction. She later admits that she is no longer scared of him, and goes out of her way to try and make him happier. 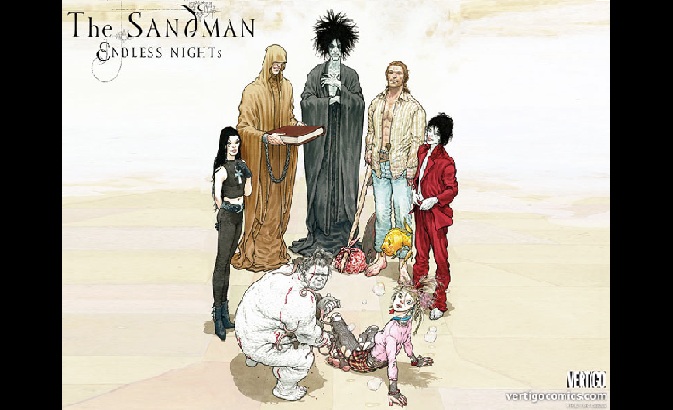 Although Neil Gaiman, the creator of The Endless, has made it very clear that he prefers leaving fans to guess at the origins and mysteries of The Endless, he has filled in some clues, most of them concerning what exactly The Endless are were revealed in the Brief Lives story arc, through Destruction. It seems, after having abandoned his duty as one of The Endless he came to truly understand what The Endless are. He says that they are simply patterns, ideas, repeating motifs and make it clear that for their functions to be performed, no actual intervention is required on their part. In fact, he goes on to say The Endless have no right to interfere with the lives of mortals.

Neil Gaiman has also added in the foreword to The Sandman: Endless Nights, that The Endless are not to be seen as gods, for gods need to be believed in to exist, The Endless will continue existing whether we believe in them or not, for they are The Endless.

The Endless spend most of their time fulfilling their functions as embodiments of natural forces. For example, Death leads the souls of the dead away from the realm of the living, while Dream oversees the realm of dreams and imagination ("The Dreaming") and regulates dreams and inspiration. One notable facet of their depiction is that none of them are "representations" or "personifications" of their function, they simply are their function; as Sto-Oa says of Death in Endless Nights, "She is Death, just as he is Dream, and that one is Desire." In The Sandman (vol. 2) #48, Destruction gives a further description of the Endless:

Some of the Endless are more dedicated to their tasks than others. The younger Endless, especially Desire, are known to play games with mortal lives. Destruction, often called "The Prodigal", abandoned his duties altogether. If one of the Endless is destroyed, then he or she will be replaced by another aspect of their role, but this does not occur if they are simply absent or inactive. In such cases, the aspect of existence supervised by that member of the Endless becomes more random and chaotic. During this time the Universe may attempt to replace that member by putting some of their essences within a mortal, as it did with Wesley Dodds, who received a fraction of Dream's soul while Dream was imprisoned.

One of the Endless, Destruction tells Dream in Brief Lives that each Endless is really a lord of opposites: life and death, dreams and reality, destruction and creation, destiny and freedom, desire and hatred, despair and hope, and delirium and sanity.

The Endless seem to have some rules regarding the way they live their "lives" with some definite "no's" if they wish things to go well in the universe. One of these rules is that should you spill the blood of the family, harm shall befall you as well, seen after Morpheus kills his son (Orpheus) which ultimately leads to the death of Morpheus, it is also why Dream said he would not harm Desire even though he very much longed to. Another rule is not to fall in love with mortals, for nothing good can come out of such a union, the most renown case being that of Kai'ckul and Nada. Though Morpheus has been known to fall in love with mortals many a time...none of the relationships ended well.

Dread of the Endless (Echo)[]

Echo is first introduced in the arc "Souvenirs", as the transvestite lover of Gabriel Ashe (a victim of the first Corinthian). Echo helps Gabriel follow in the footsteps of the very man who ate his eyes by providing him with victims (since he cannot see). Eventually, this leads to intervention from Matthew and the second Corinthian, Gabriel's crimes are repaid to him by the Corinthian, and Echo loses one eye but is left alive. Her life goes downhill without Gabriel and she ends up destitute, and while lying weak and on the brink of death on a cot in a rundown building she is attacked by thieves seeking drugs they believe are stashed there. They knock Echo unconscious and leave...but by the time Echo's friend returns "home", Echo is dead.

Echo awakes not in the afterlife but in The Dreaming where she takes on a woman's body, a woman who coincidentally just happens to look exactly like a former lover of Lucien. When Daniel decides to punish the second Corinthian for his part in Matthew's death, Echo is made the third Corinthian. She takes on the role of a Nightmare gladly and takes special pleasure in tormenting the now-mortal Corinthian (known as Alex Corinth). Things seem to be going well until Brute and Glob resurface and get Echo on their side to rally the other Nightmares and revolt against Dream.

The first place they go is the abandoned House of Mystery; once inside, the House begins talking to Echo and it asks her to be its keeper and then pours all of itself into her, all mysteries. Now, filled with this new power, she takes the next step and absorbs the House of Secrets as well and her army of Nightmares comes to her. Having captured Abel, she asks him to reveal the truth about her to the Nightmares but he says there's nothing to tell so instead she shares "the truth". That she is the twin sister of Dream, and that he was jealous of her but since he could not kill her he hid her in the sleeping souls of men and now she has finally awakened.

Echo authentically believes herself to be Dread of the Endless but it is later revealed that the spirits of the Houses were lying to her, poisoning her mind for their own ends as Dream had kept a secret from them, a secret that Cain whispered into their ear. With the secret whispered, they left their host and all was restored, leaving Echo alone until Daniel came to her and said that the old Dream would have uncreated her but he believes that in his infinite world there shall be a place for her yet.

Duplicity and Deceit of the Endless (Garamas and Gyges)[]

In the wake of Yahweh leaving behind his creation, Gyges wakes up his brother Garamas and informs him of this new development. Garamas at first cannot remember who Yahweh is but upon being reminded he agrees with his brother that this puts their own positions in question. Garamas however has his own ideas and decides that they are older orders upon which they can graft themselves. So it is that they enter The Dreaming and come to the doors of Dream's fortress, Gyges besting the Gate Keepers by grabbing one in each hand. They try to force Dream's hospitality but as it turns out Dream is not home so the one to greet them (from the window of an upper room) is Lucien.

Garamas (holding a large ankh) explains to him that they are Duplicity and Deceit of the Endless and that they should be allowed to enter, on family business. Lucien replies that duplicity and deceit are the same thing and that he knows they are the Titans, Garamas, and Gyges. He also adds that since Dream left his home specific instructions to defend itself and that he suspects they will be leaving. As the entire palace comes to life and takes an aggressive stance the Titans do leave, and Gyges proposes seeking refuge at Desire's Threshold but Garamas has a better idea, why not become Yahweh themselves. (They do actually...but that's another story).